After a month at the University of Toronto, Kateryna Luchka wants to know what to expect upon returning to her hometown of Pryluky, Ukraine – a region she described as “very dangerous” given the ongoing Russian invasion of her country.

So, she put the question Ukraine President Volodymyr Zelenskyy directly.

The exchange took place at an event Wednesday – hosted and organized by U of T’s president and the Munk School of Global Affairs & Public Policy – that brought together students at U of T and 11 other Canadian universities (see the full list below) face-to-face with Ukraine’s leader via live video link.

Wearing military fatigues and sitting at a desk between two flags, Zelenskyy delivered a short address before participating in a question-and-answer session with students across the country.

He recalled attending a U of T-hosted international summit on the future of Ukraine in 2019, when he likened Ukraine’s underdog status to that of the championship-winning Toronto Raptors – a comparison that takes on an entirely different meaning three years later.

“Today we are fighting for the future of our children and grandchildren – for the possibility of building the new country,” he said, speaking through an interpreter, of Ukraine’s efforts to repel one of the world’s largest armies from its borders.

“We shall prevail against all the odds for the free and democratic future.”

He added that Russia’s four-month-old invasion has wrought hundreds of billions of dollars in damage, erasing much of the progress Ukraine has made toward improving infrastructure, attracting foreign investment and increasing digitalization.

Kateryna Luchka, who is part of an exchange initiative between U of T’s Faculty of Arts & Science and the National University of Kyiv-Mohyla Academy (KMA), asks President Volodymyr Zelenskyy a question during the livestream event.

As for displaced students like Luchka – who is part of an exchange initiative between U of T’s Faculty of Arts & Science and the National University of Kyiv-Mohyla Academy (KMA) – Zelenskyy said security remains the government’s immediate priority.

“By standing up for our country and ensuring strong security aspects, we lay the foundation of the country that will become different after the full-fledged aggression,” he said.

He also encouraged students who have studied oversees to come back and “build an independent Ukraine.”

Luchka, for one, said she intends to return home.

“I hear people say that it’s better to stay [in Canada] because we can be more useful to the people of Ukraine – but I want to go back to Ukraine,” she said.

“We are the future generations. We will help rebuild our country.”

U of T President Meric Gertler, who co-hosted President Volodymyr Zelenskyy with the Munk School of Global Affairs & Public Policy, said Canadian universities, including U of T, are welcoming students from Ukraine whose studies have been disrupted by the war (photo by Nick Iwanyshyn)

U of T President Meric Gertler said he was deeply honoured that Zelenskyy took the time to speak with students at U of T and at universities across the country.

“President Zelenskyy, you and the people of Ukraine have earned the admiration of people across Canada – and around the world – for your leadership and your courage in this time of crisis,” he said.

“Universities across our country have responded to your call of action. Many of them, including the University of Toronto, are welcoming students and faculty from Ukraine – and because we are inclined to build bridges rather than walls, we have also forged strong partnerships with leading universities in Ukraine.”

With the support of a $3.2 million donation from the Temerty Foundation, U of T is welcoming more than 200 students from Ukraine whose studies were disrupted by the war. The first group of 20 students from the National University of Kyiv-Mohyla Academy (KMA) arrived last month through an exchange program with U of T’s Faculty of Arts & Science. A second cohort of students is scheduled to arrive in September. Three KMA faculty are also at U of T as visiting professors.

There is also an exchange program run by the department of computer science, in the Faculty of Arts & Science, and the Vector Institute for Artificial Intelligence that has brought 29 students to U of T, as well as a U of T Mississauga program that is bringing 20 students.

In addition, Peter Loewen, director of U of T’s Munk School of Global Affairs & Public Policy, announced during the event that up to 30 students from the Kyiv School of Economics (KSE) would be arriving on campus this fall to study in the Munk School’s Master of Global Affairs & Master of Public Policy programs. The students from KSE will have their tuition covered by U of T and are eligible for financial support from Mitacs, a Canadian non-profit organization, for their living expenses.

Chrystia Freeland, Canada’s deputy prime minister and finance minister, said Zelenskyy and the people of Ukraine are delivering a lesson to the world about the importance of fighting for democracy.

“They’re teaching us that you can stand up to someone bigger than you, even when the odds are stacked against you, if you believe in why you are fighting, and if your cause is right and true,” said Freeland, who is the MP for University-Rosedale.

Canada has set aside $1.87 billion in aid for Ukraine – $1.5 billion of which has been delivered – and would stand with Ukraine for “as long as it takes,” she added.

Faith Moghaddami, a student at the University of Calgary, asks President Volodymyr Zelenskyy a question during the livestream event.

Anya Broytman, an incoming master of arts student in European and Russian affairs at the Munk School, asked Zelenskyy about his role models and noted he has been compared in the media to figures ranging from Winston Churchill to Harry Potter.

“We know who Voldemort is in this war and we know who Harry Potter is – so we know how this war will end,” Zelenskyy quipped.

He then stressed that he takes the most inspiration from the “ordinary people” of Ukraine who have stood up to the Russian army, using tractors or even putting their bodies on the line to stall armoured vehicles.

Broytman, who also recently completed her undergraduate studies at U of T’s Trinity College, said after the event that she took the rare opportunity to ask Zelenskyy a more personal question to “get a glimpse of his inner world.”

“It’s so incredible to see that someone who is in this dire situation, facing incredible pressure and incredible tragedy – that he can maintain his humanity and his sense of humour,” she said. “I think that’s really remarkable.”

Originally from Moscow, Broytman moved to Canada with her family as a teenager.

“I have friends in Russia who have democratic values and who want to live in a free country, but, for the time being, they can’t even come out and protest under risk of imprisonment or fines,” she said.

“It was important to take advantage of the fact that I’m in a free country and that I can speak for those people in Russia who oppose what’s going on, who are also hostages and victims of the war – and to try to give them a voice.”

Emma Patterson, a second-year master’s student in European and Russian affairs at the Munk School, asked Zelenskyy how he has balanced martial law with preserving democracy, and how the prospect of European Union membership is influencing Ukraine’s government.

Zelenskyy responded by saying it was necessary to decree martial law for the first time in an independent Ukraine to lead the war effort. “When the war is going on, there is no time for dialogue or discussions, unfortunately,” he answered. “There is no time for this because you’re not [just] counting seconds or minutes, but human lives – the number of survivors and the number of dead.”

As for EU membership, he said the next few days would be decisive and that hopes in Ukraine were high that it would be formally granted candidate status.

Patterson says she was honoured to represent U of T and speak to Zelenskyy, a leader she views as an inspiration.

“As someone who studies democracy, [I’m interested in] how they’re able being to maintain it during a time of war when priorities are shifting and everything is changing,” she said.

Peter Loewen, director of U of T’s Munk School of Global Affairs & Public Policy, said up to 30 students from the Kyiv School of Economics (KSE) would be arriving at U of T this fall to study at the Munk School (photo by Nick Iwanyshyn)

In response to another question from Faith Moghaddami, a student at the University of Calgary, Zelenskky said that Ukraine isn’t just fighting a war on the ground but also a battle of information. He likened the internet to a weapon that shows the world the casualties Ukraine has suffered and the damage Russian forces have left in their wake.

“This is a powerful instrument,” he said. “I don’t want our partners to be offended, who do transfer very powerful pieces of weaponry to us – but I have to be honest, there’s a big question: What matters more and what kind of weapon protects us more?

“Information – the word – sometimes can give a bigger blow than some types of weapon[s].”

As he’s done while addressing legislatures around the world, Zelenskyy reiterated his plea for support – weapons, money and humanitarian aid – and he thanked Canada for helping Ukraine.

“Canada is helping us as much as it can,” he said. “It’s very important that yourselves, students from many other countries, would pass on this message to their respective countries to pressure their political management to give Ukraine what it needs.”

As for Luchka, she said she hopes to one day help make changes in Ukraine’s educational system, adding that she feels inspired by her time at U of T so far – and by the opportunity to speak with Zelenskyy.

“I know that the president wants the students to return to rebuild our country because if not us, who else,” she said. “I think he gave me hope for the future that we hold the power and that we can make the changes. Firstly, we need to end the war.”

Read more about the event at Reuters

Watch a report about the event on CBC’s The National

Here is the full list of participating universities on the livestream (in addition to U of T):

Although they did not take part in the livestream, U of T Scarborough also hosted a YouTube viewing party, as did Guelph University, McMaster University, Toronto Metropolitan University and other universities across Canad 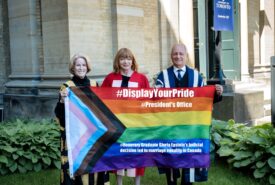 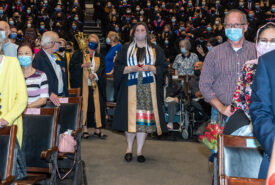 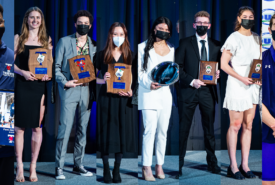 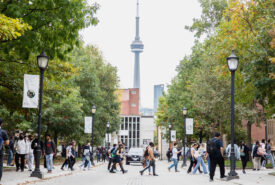 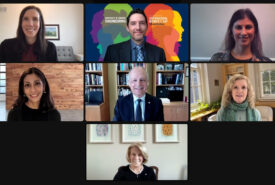 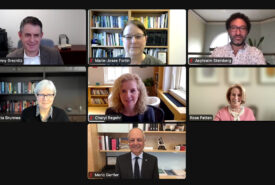